Bankuet is the UK’s first online zero waste food donation platform. It supports over 100 food banks in 51 cities across the country and fed roughly 20,000 people in 2020. We spoke to its CEO, Robin Ferris, to hear his journey of pioneering, reaching out with Jesus’ love and using technology in new ways.

Bankuet is the UK’s first food donation platform. Our mission is to get food banks what they need when they need it and to make it easier for people to give. Ultimately our vision is a UK where no one goes hungry.

Normally people donate to a food bank by finding their local food bank, asking what they need, finding a time to buy the food and then dropping it off. Or by donating food after the checkouts at supermarkets. At Bankuet, a donor can go straight to our website and give £10, £20, £50 or £100 as a one-off donation or as a monthly subscription. We’re all familiar with subscribing to Netflix or Spotify so I wanted to explore a similar solution for food banks to make it easier to give.

Each week the food bank sends us a shopping list of what they need, and we at Bankuet buy the supplies at bulk from national retailers or wholesalers and deliver it. As well as making it easier for donors, our platform also means that food banks get the items they need and for every pound donated, we can give more than a pound’s worth of food as we buy in bulk.  For example, at the height of Covid-19 we sent an articulated lorry full of supplies to Hammersmith and Fulham Foodbank in London.

What gave you the idea of starting Bankuet?

I’d been volunteering in food banks in London for a couple of years and noticed a gap in the supply chain. We’d get lots of donations, which was brilliant, but they were often things that we didn’t need or had too much of, like pasta or baked beans. Instead we wanted items like nappies or women’s toiletries or shower gel. So I began to think how we could get food banks the things that they actually needed.

My professional background is working in the music industry. I started out with the Christian record label Furious? Records and the band Delirious?, and then I moved to the secular music scene, working for Island Records. I’ve seen how tech can disrupt things in my industry – we witnessed the transition from CDs to streaming or DVDs to Netflix and iPlayer. I began to wonder if there was a way that tech could similarly affect the food donation and supply chain, bringing a modern solution to this horrible problem of hunger.

I founded Bankuet in July 2019 and we ran a pilot with Wandsworth Foodbank, and by the end of 2019, we’d helped 10 food banks around London as that’s where I was based. Eight months after we started, the pandemic erupted and suddenly we had to grow exponentially. 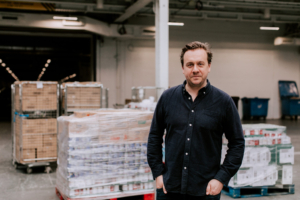 How has the global pandemic affected communities and Bankuet’s work?

The pandemic has had a devastating effect on communities – over 4 million people have gone hungry during the lockdowns, including 2.3 million children. Suddenly lots of people were using food banks who’d have never expected to and the demand for food banks went through the roof. At the same time, the model of food banks is largely physical and traditionally depends both on volunteers and people dropping off food, so the pandemic also disrupted this model as people were suddenly shielding or not wanting to go to supermarkets.

We scaled up overnight – online donations to the platform went up by over 5000% month by month last Spring during the first lockdown. A lot of things in industry come down to timing and we suddenly found ourselves in the right position to help. We’d had eight months to learn and develop our platform, but we hadn’t had time to become too rigid or set in our ways and structures, so we could adapt and scale up quickly when the pandemic hit.

I was overwhelmed by people’s generosity. I’d always thought that people would want to help each other if we could make it easy, but the scale was unbelievable. We also suddenly had lots of volunteers as people were on furlough, so it felt that God’s hand was on the timing.

How did your faith influence your decision to start Bankuet?

When I reached my late thirties, I started to wonder and pray with friends about what might be next in my career. Often in church we talk about ‘being called’, but it can sometimes be loaded language and we can assume it means being called to ordained ministry. I wanted to make a difference but I knew it didn’t look like becoming a vicar.

Looking back, I can see God’s hand on the jobs and experiences that I’ve had in the past. I loved working for the creative industries: it taught me the importance of innovation and how technology can change the shape of an industry. When I was at Island Records, we broke Amy Winehouse as one of the most influential artists of her generation, and Stevie Wonder, McFly and the Sugababes were on our books. I remember being there the night Amy Winehouse won five Grammys against the odds in 2008. These things shaped who we are at Bankuet – creativity, energy and innovation are part of our DNA.

I often doubted that I could be an entrepreneur or if it was a wise decision to start something completely new – I would compare myself to my friends who had settled down or held senior positions. I didn’t know where the idea of Bankuet would end up, but eventually I had to trust God and step out into the unknown. I would walk about Victoria Park praying, ‘If this is your idea God, I’ll do it.’ As I look at what’s happened over the past couple of years, I realise that God’s been very present guiding us. Last year Bankuet helped over 100 food banks, shipped over half a million items and fed around 20,000 people in 2020 – we definitely couldn’t have achieved this without God, even with the greatest team.

What would you say to someone who has a vision for starting something?

I’d encourage people to take the first step. We don’t need to quit our jobs initially – there are lots of things we can fit alongside our existing commitments. Speak to people and explore your idea with them – you’ll be surprised at how many people want to help or pray or share their wisdom. I’ve experienced this a lot with Bankuet – people have been so generous in sharing their expertise and skills. We sometimes need support executing our ideas and realising our vision, so reach out to lots of people.

There are also frameworks to help – I was part of an Accelerator Programme run by Resurgo Ventures for entrepreneurs running a business with social purpose. The thought of calling myself an entrepreneur was terrifying, but the programme was brilliant at helping me to develop my idea and understand myself and others better. There was a mixture of business strategy, social impact measurement and marketing, as well as leadership development and coaching. Entrepreneurs and pioneers by nature are often disrupting things and have a unique way of viewing the world, so we can often feel like outsiders. Initially I didn’t think I knew enough about technology to run a tech start-up, but coaching helped me understand that Bankuet is ultimately about connecting people.

How can the church support pioneers and entrepreneurs?

When I look at the biblical narrative, I think it’s our responsibility as a church to be pioneering and pushing for change and social justice. My vicar at King’s Cross Church (KXC) in London, Pete Hughes, constantly reminds us that God is in the business of making all things new and we can each play a part in this. Often we think being creative means writing songs or being an artist, but businesses and social impact ventures are addressing problems creatively. Pioneers often open the doors for others and see things in different ways – it’s important to be creating communities that celebrate ideas and support a pioneering culture, so pioneers can step forward. Sometimes we just need a space to speak out and share our ideas.

How can someone get involved with Bankuet?

Lastly if you’re a food bank, you can join Bankuet here.

Many people, like Robin, feel called to make a difference in the world. At CCX we help these pioneers learn more about their calling, equip them to get started, whether it’s starting a new enterprise or a new Christian community, and network them with like-minded pioneers across London and beyond.

If you’d like the opportunity to explore your calling as a pioneer or talk about your idea to make a difference with a group of similarly-minded pioneers and activists, check out our web page here or get in touch with our pioneer enablers at pioneer@ccx.org.uk.