A new resource church has just launched in the heart of Bradford. Its home will be a former city centre nightclub and its heart is to be a sending church from the very beginning. We spoke to Fountains Church’s leader, the Revd Linda Maslen, to find out more about this vision to grow and send out leaders to bless the city of Bradford.

“Fountains Church isn’t going to be comfortable”, Revd Linda shares. “We’re going to be on the move from the start. Even as we are setting off, our heart is to find those whom we can send.”

The team from Fountains Church set off officially September 2019, launching an afternoon service in the City of Bradford with around 150 people attending and a commissioning by the Bishop of Bradford, the Rt Revd Toby Howarth. Its vision is to love God, live as family, and be fountains of living water to bless Bradford. The church’s name is drawn from its future location: by next year the congregation will move to their new building overlooking the City Park fountains of Bradford. “It’s a well-loved area of the city, with the fountains creating a relaxed, continental feeling,” says Revd Linda, “and we hope this will be a space where we can build relationships and share Jesus.” 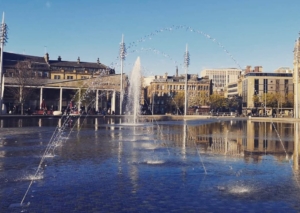 The new home for Fountains Church is currently in the final stages of being purchased; it will then be rebuilt, having been the venue of three different nightclubs in the past. Over the coming months, the ground floor will be converted into a 250-seat auditorium and café. The next phase will involve remodelling the first floor to create an 800-seat auditorium overlooking the city, the fountains and Bradford’s City Hall.

Although most people will associate this site with Revolution Nightclub, Fountains Church isn’t the first church to call this place home. The team have been excited to discover that two congregational churches previously existed on the site – the first in the eighteenth century was knocked down to build a larger 800-seater in 1861 called the Cathedral of the Non-Conformists, with services led by preachers such as Titus Salt and Jonathan Glyde. The vision of these worshippers was that there would be nothing lacking for the expansion of religious and spiritual growth in Bradford; and Fountains Church is passionate about reclaiming this legacy and seeing God’s kingdom grow in its fullness across the city. The church is supported by the Diocese of Leeds and New Wine, which both have a vision to see local churches impacting communities with the love of God.

”It seems impossible without God, but when I put God back at the centre and see the need in the city, it feels an amazing opportunity to serve my hometown.

The team are excited about reaching different demographics in Bradford, including students at the nearby university and college, those working and visiting the Magistrates’ Court, businesses in the city, and those on the margins of society. One idea is to have a service based around wrestling, with a boxing ring in the church, to draw in young people who are struggling, particularly from the Asian community in the city. Another possibility is to hold exercise classes during the week, creating relationships with those in the area who wouldn’t usually attend a church. 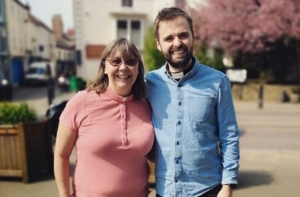 The team itself is eclectic, coming from Bradford and beyond. Around 25 team members served at the launch, including four members who have moved to the city to be part of this new venture. Being a resource church led by a woman also lends a different dynamic to the team; Revd Linda commented, “I’m really looking forward to joining this small group of women leading and growing larger churches, as we can bring something different to the equation. Hopefully I can be an encouraging example for those following in my footsteps.” Revd Linda herself was born in Bradford and gave her life to Jesus in 1977 at St George’s Hall in the city. She felt God calling her back to Bradford when the prospect to lead Fountains Church suddenly appeared, and still feels both excited and daunted by the task. “It seems impossible without God, but when I put God back at the centre and see the need in the city, it feels an amazing opportunity to serve my hometown.”

Hear from planters about their own journey and experiences. The highs and lows, successes and challenges and learn from their stories.

Estates: Come As You Are

Plant Stories: The Journey to Shadwell