Painted on a wall in Christ Church, Gosport is the phrase, ‘Good things for Gosport’. Revd Ray Driscoll shares the journey of launching a new family service, reaching out to the community through lockdown, supporting local primary schools and starting a ‘Love Gosport’ campaign, all centred on the vision that God has good things for Gosport. 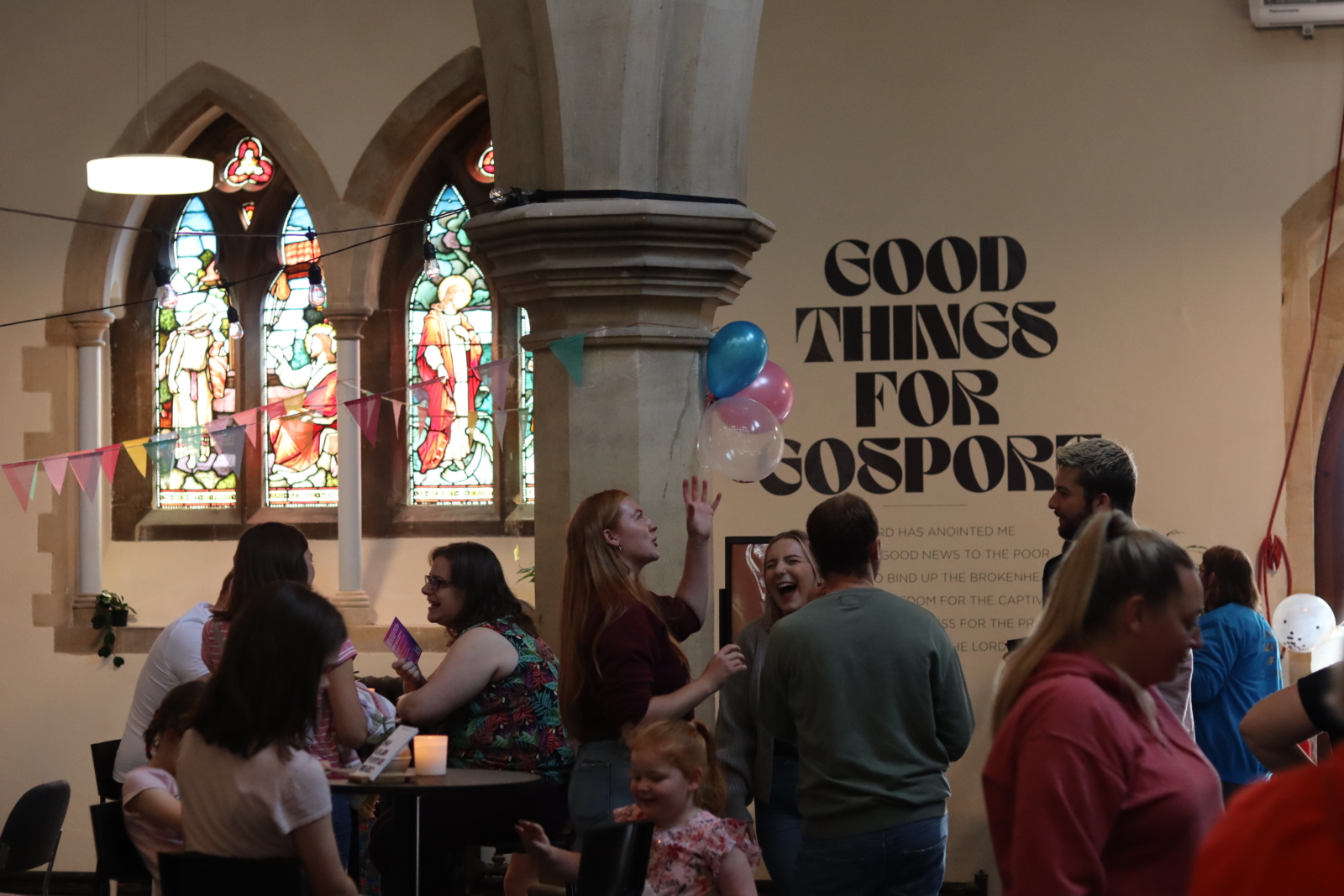 I didn’t grow up in a Christian family or go to church when I was young. As a teenager, I started going to a church youth group – I was the awkward kid who asked all the difficult questions and asserted that I’d never become a Christian! But one year at Spring Harvest, it all became real and I made a commitment of faith. That summer, my small Baptist church let us run a holiday club for the local kids as I wanted to do something for the community and since then I’ve always been involved with church life and youth work. I ended up training and working as a youth worker and I’m now an ordained pioneer minister in the Church of England. I grew up on an estate in Surrey and have always had a heart to minister in more deprived areas. I’m married to Nic and we have two sons.

In August 2020 after my curacy ended, I came to join the team at Harbour Church on the South Coast in Portsmouth. The Bishop of Portsmouth had invited Harbour Church to play a part in the revitalisation of Gosport, a town which is on a peninsula just across the harbour from Portsmouth. Research had found that 99.3% of Gosport had no meaningful connection with the church. This statistic gave us a real incentive to try and do something new. We planted out to Christ Church Gosport mid-pandemic (between the two lockdowns) to start a new family service and help the church to reach the local community, share the gospel and grow in impact, depth and numbers. I’ve become team vicar of three local parishes, including Christ Church, in the south of Gosport. We are a part of Harbour Church (which is a resource church), so we work together in the vision to serve and bless Portsmouth and Gosport. As we didn’t plant into Gosport with a big team, the support that Harbour has given us in terms of finance, buildings and communications has made a huge difference. We couldn’t have done it without their continual generosity and this resource church model has worked really well for us. Isolation is also a big issue for vicars in contexts like ours, so Harbour gives us a community and support system, and will make us more sustainable in the long term.

We spent the first year in 2020 renovating Christ Church, setting culture and reaching out to the community through the lockdowns. We had some development funding so we spent time transforming the building and making it fit for purpose. The lockdowns were debilitating in many ways but they also gave us incredible opportunities. We couldn’t plant in a typical way so we started with social transformation work. When the second lockdown hit, I’d already gathered a small team and we came up with some new initiatives. We had the phrase ‘turning heads and winning hearts’ as the essence of what we wanted to achieve. There are four primary schools in our parish and they needed more content for homeschooling. We started producing short acts of worship every week for online school assemblies. The quality was awful at the beginning as we filmed them on my webcam, but we tried to come up with funny and interesting content, which was broadcasted out to all the families at home from these four schools. We knew it was having an impact when one of my team got recognised on the street as Lockdown Larry!

We also partnered with one of the nearest schools to prepare freshly cooked meals for their most vulnerable families twice a week. We cooked and delivered meals for 30 families in partnership with a local food bank and another food initiative called the Trash Cafe: it felt like HelloFresh meets Just Eat! It was an amazing collaboration between local organisations.  We also started a campaign online called ‘Love Gosport’, where we put out a positive post every day, such as a recipe or a mental health tip or a family challenge, like how to play ‘Floor is Lava Obstacle Course’ at home. This helped us to be part of what was happening in the community online and the ‘Love Gosport’ Facebook page eventually became our Christ Church page.

The narrative around Gosport has traditionally been quite negative – a single mum once said to me that Gosport is a really sad place. It’s a very static and predominantly white working-class community. The economy is quite weak – some of the wards are in the top 5% or 10% of deprivation. It’s got a rich naval history so lots of families have naval connections but the Navy has now moved most of its operations elsewhere, so it can feel like Gosport has lost its heart and soul. We felt that we wanted to draw out the good in this place. Sometimes when we move to a new context, we want to go with the grain but sometimes we need to go against it. We want to do our bit to change the trajectory of people here, particularly young people, so we had the words ‘Good things for Gosport’ painted on our church wall.

Initially, we started as a small group online as we couldn’t meet in person and by Easter 2021, 30 of us met together on Sunday mornings – we didn’t publicise anything as we hadn’t officially launched but people kept coming! We held a launch week in September 2021, where we built on everything that happened in lockdown. We staged a spectacular for the primary schools, we put on a gig night with a local promoter on Friday and we had a family funday on Saturday. We were hoping for about 200 people but 850 people came along! I have photos of people queuing outside – it was unbelievable. Again it really helped to turn heads – people often think that church isn’t a place to play live music or that it’s boring and not for children, so we’re trying to change that perspective. One new member of our congregation, Dave, who’s lived in Gosport all his life, came to church and was overwhelmed by the welcome he was given. We baptised him a few weeks ago and he’s recently done a video for our next Alpha course with his fiancée Cheryl, which you can watch here.

Since we launched the new family service, we’ve been steadily growing, with over 100 coming regularly and 30% of our congregation is under 11. We are reflective of Gosport, a beautifully broken bunch of drifting Christians, returning prodigals and people who are not sure how they ended up caught up in this new venture. We joined an existing congregation so there’s also a traditional service every Sunday. To begin with there was some uncertainty and even some underlying hostility; now there’s lots of love and collaboration between the two congregations. We’re finding that we enrich each other and there are wonderful cross-generational friendships – some of our 20 year olds now go out for cocktails with our 70 year olds.

Moving to Gosport has definitely been an adventure – we’re having to get very good at adapting and living with uncertainty. I often think ‘I don’t think we can do this’ and then someone suddenly appears to help us. We have a vision to use art in Gosport’s more deprived contexts – one of our churches, St John’s, had an amazing initiative to allow the local college to put gigs on in the building. One of the staff at the local academy trust is a Christian and suggested that the group of schools could employ someone full-time at St John’s to build a strategy around arts for two years. He asked if we knew anyone who might be interested in the role. At the same time, a lady joined our team who had turned a derelict pub in Liverpool into a community art facility. She now works with us to grow this arts vision in one of the most deprived areas in Gosport. We’re learning that God always provides but he does it in real time so it can still feel utterly terrifying!

To find out more about the work of Revd Ray Driscoll, Christ Church, and all God is doing in Gosport, visit their website.

Join us on Thursday 23 June at our conference, Multiply 2022, to hear and share more stories of local churches reaching new people, in new places, in new ways.

If you’re interested in planting a new service or community in your local area, head over to the Plant Course to find out more.